There’s more to capturing the action than simply freezing the movement by using a fast shutter speed and shooting at 10 frames per second. Philip Dunn explains that good action photography starts with anticipation and an understanding of your subject. It is far more important to capture the right moment than freeze the wrong one

No motor-drives, or multiple-shooting modes were used when capturing the action in the picture above. It was taken on a basic Nikon F2 many years ago in the West Indies. I captured the action simply by pressing the shutter at the right moment. That does take a lot of practice, but is a skill that can be learned.

The picture below of the Arabian horses racing in the Jordanian desert was taken with a shutter speed of 1/1000sec – this fast shutter speed has frozen the action and rendered the horses and riders acceptably sharp.

That’s fine – the easy bit was setting the camera and pressing the button. But that frozen moment in time could not have been caught unless I had planned my shooting position and anticipated the movements of the riders. This had to happen even before I pointed the camera. Of course the camera had to be just as ready for the shot as I was. I used Manual Exposure Mode settings here, so that meant the shutter speed and aperture were set ready.

The point is that unless you are lucky, you must think well ahead when capturing the action. Anticipation is just as important as quick reactions, good timing and camera settings.

The photographer must be ahead of the game

All the best sports photographers have an understanding and passion for the sports and games they cover – they know what their subjects are likely to do next; which way they will turn, kick the ball or shoot for goal. These photographers anticipate the action and are usually just a fraction of a second in front of the game.

I was never very successful as a football photographer because I loathed football.

Of course with a subject like the desert horse race, a photographer is unlikely to have previous experience of what is going to happen next – so you will have to ask people who have seen it before. Find out what is likely to happen; what the participants will do; where they will go. Get there early and take a good look at the lie of the land beforehand. Common sense and a photographer’s ‘instinct’ come into play as well.

The old press photographer’s maxim: ‘be first to arrive and last to leave’

In this case, there seemed to be no rules at all and the race was a free-for-all. I was told that the riders generally galloped around the rock-strewn course in one direction to practise before the start – that’s when this picture was taken. The best I could do was choose a good angle for background and light and watch with my finger ready on the button. When a rifle was fired into the air to start the race, the riders simply whooped away into the desert and disappeared in a cloud of dust.

Be a fraction of a second ahead when capturing the action

It works. Perhaps it is the way the brain and fingers co-ordinate. Add to this the millisecond delay for auto focusing on modern digital cameras and unless you do something about it, your action pictures can be consistently ‘late’

“… be trigger happy and press the button a fraction of a second before you think you need to.”

How to learn the art of capturing the action 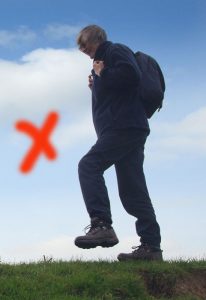 Good timing is essential even with the simplest photographs of moving people if they are to be successful. One good way to learn the art of capturing the action is to photograph people walking.

If you are photographing a person walking past the camera, you have to show that the 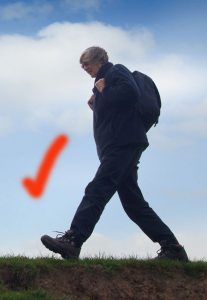 walker is doing just that – actually walking and not doing a jig or standing on one leg.

So show both legs. Time the strides and press the button when the legs are striding well apart. If you take the picture mid-stride, as one leg comes across the other, you will make it look as if the walker is standing on one leg. It nearly always looks awkward. You know perfectly well that the person is walking because you photographed him doing it. The viewer of your photograph, however, sees a person stood on one leg.

The walker’s arms will also look wrong mid-stride. People tend to swing their arms in time with their legs.

A speed of 1/250sec should be enough to freeze a person walking slowly across your field of view, but 1/500sec will make sure. These pictures were taken at 1/350sec.

The skills you gain when learning how to time a walker’s strides, will be the foundation of countless great pictures when you move on to Street Photography. Remember, anticipation and good timing is the essence of capturing the action at precisely the right moment.

The action shot above was completely planned. It shows Mr Donald Bean, a leading light in the Canoe Club, who was still at the age of 79, setting off across the world on canoeing expeditions.

I needed a picture showing Mr Bean’s face to go with a magazine story about this OAP’s extraordinary adventures. There are not many whitewater rapids in Staffordshire where Mr Bean lived, so we had to make-do with a river weir. You’ll notice that close cropping has eliminated all the background except the water. Close cropping often works well in helping to accentuate the action in a picture.

As I was taking these pictures a lady came up to me and berated me for encouraging ‘that poor old man’ to do such a dangerous stunt. She would not believe that this was small fry to Mr Bean, who was used to shooting some of the most fearsome rapids on Earth – everywhere from The Alps to the Himalayas. Sadly, Mr Bean is no longer with us.

I used a shutter speed of 1/500sec but, again, that careful timing was crucial.

I hope you enjoy capturing the action everywhere you go.